For the past two weeks, I have as the new intern been joining Momentum’s field officers at the farmer groups’ meetings. One thing that shines through at every meeting is the farmers’ strong interest in being part of these groups. And right now many of the groups are even experiencing that new farmers are eager to join. Read along to get a glimpse of Momentum’s work with farmer groups. 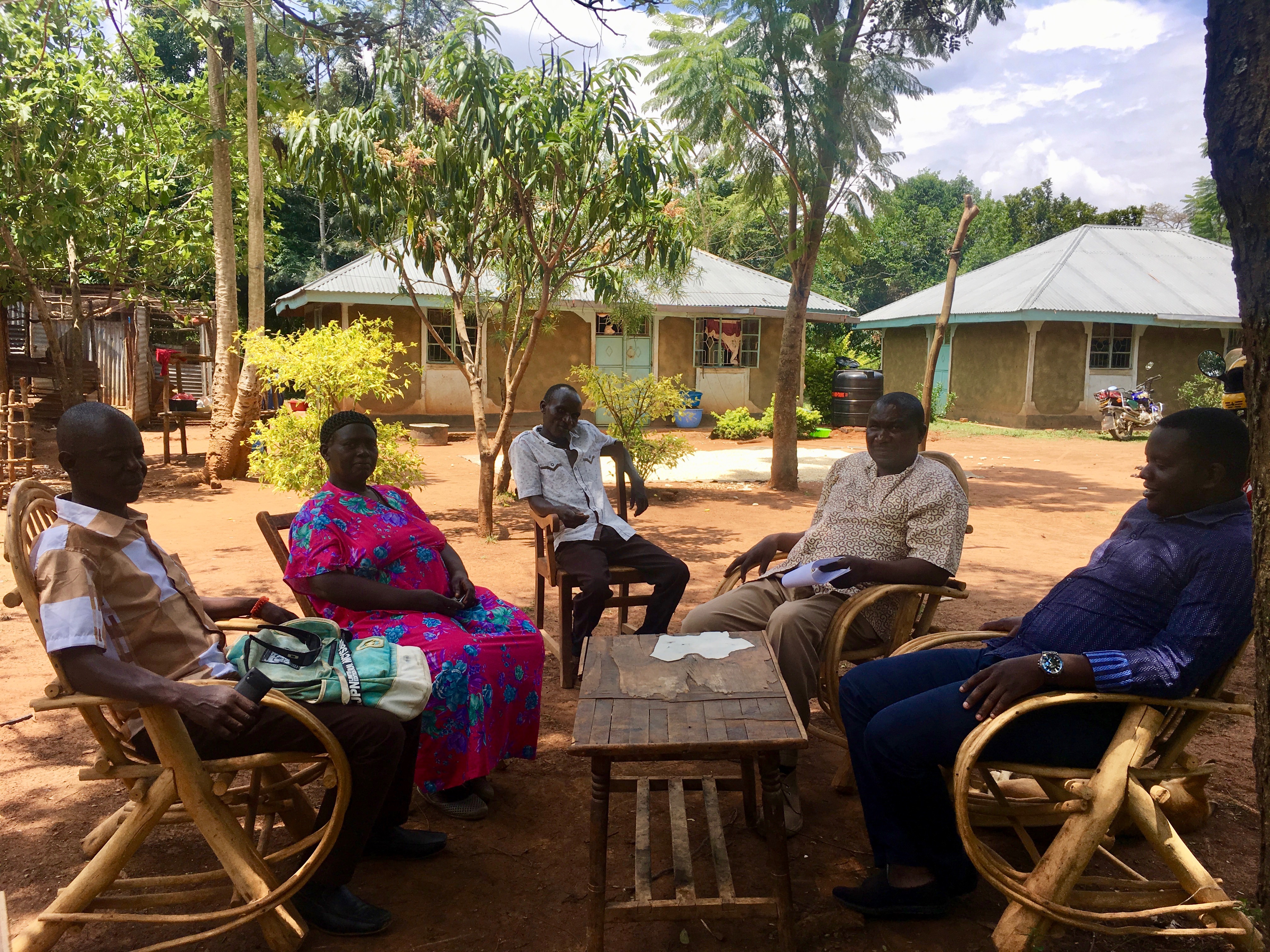 The meeting with the group Kodiere felt as if we were sitting in an open-air living room. Group member Anthony (second from the right) had some very comfortable wooden armchairs.

Momentum provides loans in the form of farm inputs (i.e. fertilizer and seeds) to farmers in Kenya. These farmers are usually organized in groups to keep track of the loan repayments and to motivate farmers. The group organization also makes it easier for the field officers; they only have to be at one point at one time to meet several farmers instead of visiting them individually. Currently, Momentum has 21 groups in the area of Siaya. For the past two weeks, I have visited around half of them.

The course of a group meeting: From prayer to payment

One of the better performing groups is called Kopondi. They meet every Wednesday, and at the last meeting two new members joined. I arrived with the Momentum field officers on motorbikes to the house of Anna Abala – the group member hosting the meetings. Several members were already sitting on plastic chairs under the big tree in her garden. The tree provided shade in the sun, even though it was not that hot and looked as if it could rain.

It took around half an hour before the 13 group members had arrived and enough plastic chairs had been found. We started the meeting standing with a small prayer. Everyone looked to the ground, while one of the group members directed the prayers. People in this area are very religious – most are Catholic and go to church every Sunday.

Unfortunately, I do not understand Kiswahili, the national language, or Luo, the local language. I am mostly a passive observer, but once in a while the field officers fill me in on some details or answer my questions. For instance, I was wondering why mainly women attended this meeting. It turns out that most men are usually busy in their fields or with other work and thus send their wives.

After the rain finally took off, the Kopondi group gathered under the tree where the meeting had started. I’m the one who sticks out shaking hands with the group secretary.

After the prayer, the meeting could start. But soon people started to rise; it seriously looked like it was about to rain. We all hurried to Anna Abala’s living room. It was a very small room for 16 people and we only barely managed to squeeze all of us in there. It rained so heavily that we could hardly hear one another as the raindrops hit the metal roof. Luckily, after a while the rain took off.

The meeting continued with every member paying back part of his or her loans and by the field officers recording each farmer’s output of the last season. The harvest was in July and most farmers in this group did really well. Only two had disappointing outputs due to termites attacking their yields. At the end, two new farmers joined the group by paying a registration fee. These two farmers will now as part of the group take loans for inputs to plant this season.

Also the group Asere experiences interest from new farmers who want to join. This is a small group of six members. Their latest meeting took place in the garden of group member Edwina. She had a cow that mooed so loudly that it had to be moved. Afterwards it was only the goats and chickens that provided a little background soundtrack.

Two new members attended to hear more about Momentum. One of them, Alfred, decided to join and pay the registration fee. I was curious how Alfred had heard about Momentum and why he wanted to join. The field officers helped me ask and translate.

“My neighbour is a Momentum farmer. For me it is important to work closely with my neighbours. I think that by both being Momentum farmers, we can better support each other,” explained Alfred.

A few days later, I attended another meeting in a completely different setting. This group is called Kodiere and currently has 5 members, but used to have 21. We were sitting in the garden of group member Anthony in comfortable wooden armchairs. We sat around a small wooden table, and to me it felt as if we had moved his living room outside under the tree.

During the meeting, the group members talked with the field officers about the past season and the prospect for the coming season, and it became clear to me how big an impact the drought of 2016 has had on the farmer groups.

“After the drought in 2016, our group experienced a serious down-scaling as people struggled to repay and afford new loans. Fortunately, the long rain season 2018 (spring to summer) went well. And it seems like the coming short rain season 2018 will be good. The farmers are now better off, and we can feel that more farmers are eager to join,” explains Anthony, the group coordinator.

Even though all groups are different, they all seem to have in common the farmers’ strong interest in being part of Momentum’s groups. The fact that these groups continue to meet weekly and now attract new members is to me a clear sign of the relevance of Momentum’s work in this region.